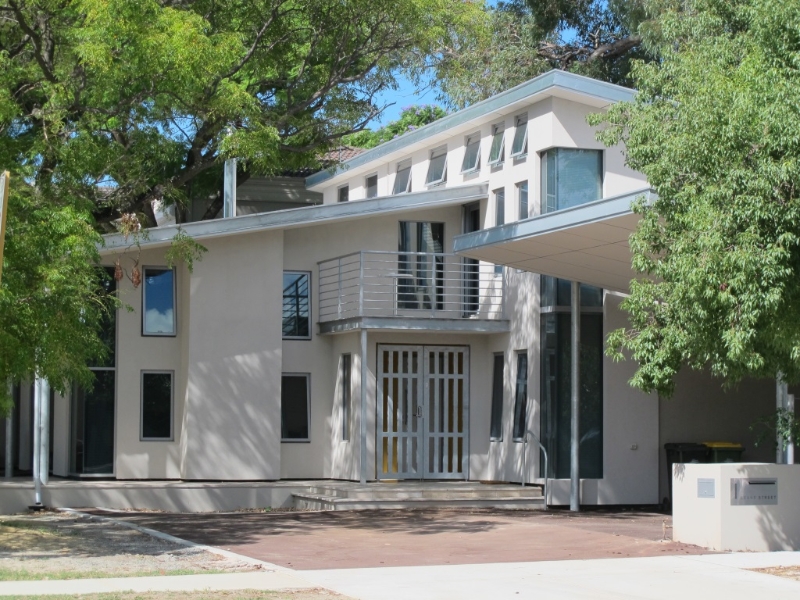 This modest home has received recognition from the HIA (Housing Industry Association) in their West Australian 2013 ‘GREENSMART AWARDS’. The house won the ‘ENERGY EFFICIENCY’ category and was selected as the ‘CUSTOM BUILT HOME OF THE YEAR’. Most importantly it won the overall prize of ‘HIA GREENSMART HOME OF THE YEAR’, giving recognition to the multitude of energy efficient design elements incorporated into this very low impact home, the builder – Econstruct, and for the support and understanding of an enthusiastic client.

Designed for a professional academic couple with independent space for their son and occasional guest bedrooms combined with activity/study spaces, the house is modest, compact and nestles back into the site to maximise the northern orientation – solar gain – and outdoor living areas with views across the park to the Swan River and the Perth CBD.

A microclimate cool courtyard has been created in the back corner of the site with access from the kitchen/scullery to provide a cool air reservoir for intake air on still days to replace warm air flushing through the clerestory windows at high level in the southern upper rooms,  which provide solar access to the back of the house.

The open plan living area extends into the study and kitchen/scullery areas below the southern upper floor and together with the upper study space draw the open void into the southern two story section of the house, blurring the distinction between the two and linking the whole.

The split skillion roof to the northern slope lightens the form of the void and allows shafts of winter rising sun to penetrate the kitchen and living areas and delineate the morning with their progress across the interior. The northern patio area is shaded with solar louvers that provide summer shade with winter solar access to warm the interior limestone floor in the heating season.

Constructed over a thermal mass concrete slab with light weight steel wall frames to the exterior, the house is clad in 75mm thick expanded polystyrene with durable acrylic render finish and with fibreglass fill to the frame voids achieves exceptional insulation values when linked to the double glazed thermally broken aluminium doors and windows. Additional thermal mass is provided with the solid masonry internal walls which, with their minimal 90mm thickness absorb stratified winter warmth from high level and return the warmth of the day to the lower part of the house during winter nights.

Windows to all of the southern rooms allow intake of cooling afternoon sea breezes to flush out the heat build up of summer days with low pressure leeside openings on the north inducing greater air speed and conscious cooling to occupants.